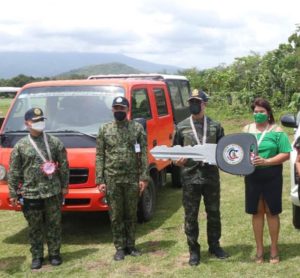 The donated lot is for the proposed construction of a new standard Police Station building while the 4×4 pick up truck, one Bongo Kia Utility Vehicle, two Honda XR motorcycles and one XLZ 125 Yamaha motorcycle will enhance the “move” capability of the local police force.

The signing of the deed of donation and the ceremonial turn over was held at Brgy. Robles La Castellana, Negros Occidental.
The deed of donation was formalized through Sangguniang Bayan Resolution No. 2021-030 dated June 21, 2021, authorizing Hon. Rhumyla G. Nicor-Mangilimutan to donate the property to the PNP.

In his message, RD Miranda underscored the importance of the LGU support in law enforcement activities.

“These will strengthen the anti- criminality efforts of La Castellana police station and will greatly help in maintaining peace and order as well as in enforcing the health protocols.” RD Miranda said.

He also emphasized that the donation of lot and the turn over of vehicles reflects the trust and confidence of the LGU to their police.
“Dito nasasalamin ang tiwala at pagkilala ng mga local leaders kung gaano ka importante ang trabaho ng ating mga kapulisan” RD Miranda added.

PBGen Rolando F Miranda thanked Mayor Mangilimutan and the the staff of the local government of La Castellana for their continued support to their local police force.*

SYNOPSIS: At 3:00 PM today, the center of the eye of Typhoon “KIKO” (CHANTHU) was estimated based on all available…

TOKYO – Eumir Felix Marcial lost to Ukraine’s Oleksandr Khyzhniak via split decision, 2-3, on Thursday to settle for a…