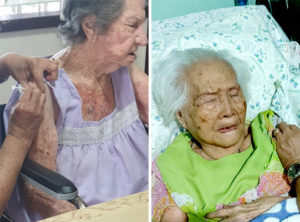 Two residents, both ages 104 years old, became the oldest vaccinees in Kabankalan City after they were inoculated on August 2.
Argentina S. Azcona and Esperanza V. Gargantiel both from Brgy. 3 of the city were inoculated with Astra Zeneca.
The centenarians were optimistic and convinced to get the shots. They are considered role models of the City.
Mayor Zayco is urging all Kabankalanons to be vaccinated against COVID-19 as well as observe the basic health protocols.* (City Government of Kabankalan)

15M students already registered The Department of Education (DepEd) reminded parents and students of the enrollment deadline on June 30,…

In the current trend of digitalization in education, and in adapting to the new normal in conducting online classes, the…

A top drug personality of San Carlos City in northern Negros Occidental yielded P1.088 million worth of suspected shabu during…