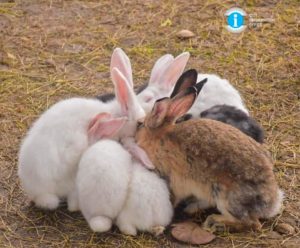 Ponferrada who is also the Focal Person of San Carlos City Cultural Heritage Council and People’s Park Management Office Head was able to exhibit, promote and slowly change people’s mindset on rabbit by marketing it not only as pet, but meat as staple food; parts as souvenir items while its dirt as fertilizers.

He served fried Rabbit meat “bunny joy” at his Yanchie Farm extension through the agri-tourism fair.

Ponferrada said that rabbit breeding was popularized in the Philippines five years ago where most breeders are from Luzon area but during the Spanish colonial period, friars brought rabbits for meat consumption and due to the cute appearance and fur, they were made as pets by Filipinos.

“There are two types of rabbit; the fancy breed like the Lionhead which are for pet and the ones intended for meat consumption which are heavier in weight and can be butchered in 4 months time like the New Zealand, California, Chinchilla, Palomino and American Blue,” he said.

Ponferrada shared that he and his partner, Ian Publico, a nurse, have been raising rabbits for almost a year in their Yanchie Farm in Barangay Quezon since it was introduced to him and learned that rabbit meat is a healthier substitute for pork and beef which is rich in protein and Selenium, good for women trying to conceive at the same time boosts men’s sperm count.

He and Publico said that their prices of rabbits in their farm starts at P1,000 per pair depending on the type and they are willing to give lectures and aids to eager individuals to sustain their rabbit breeding.

He said advantages of rabbit breeding include affordability due to its production cost even with limited space and fast propagation; it can be fed with 100% grass with high content of protein maramais and napier and also mulberry and madre de agua or 70% grass and 30% pellets; dressed rabbits sell at $450.00 per kilo.

He also said that challenge in rabbit breeding happens when Does (female rabbits) give birth since you have to prepare the necessary materials needed five days before to ease delivery of kit/kits but this may be overcome thru thorough researches.

Ponferrada added that the Negros Occidental Provincial Government accredited their farm as an Agri-Tourism Farm due to varied productions.

He hoped the local government of San Carlos City through the City Agriculture’ will venture on dispersing rabbits and conduct seminars to educate the people.

“I looked forward to people in San Carlos raising rabbits in their spaces and backyards especially the meat type for food security and good source of income and later on share opportunity with other families,” he said.* (San Carlos City LGU Information Office text and photos)

Vaccination of minors in Negros Occ. waiting for DOH signal

Preparations are on in Negros Occidental for the vaccination of minors, although the provincial government is waiting for the cue…

Governor Eugenio Jose Lacson is reminding Negrenses and everyone to reflect on the holy days and to remain safe. “My…

Central Negros Electric Cooperative, Inc. is pleased to announce that a thirty-day grace period shall be given for electricity bills…