If there’s a story that proves true love develops, stands the passing and test of time, it’s this one.

It was not about a greatly immortalized high school “boy- meets-girl” or the “teenybopper meets the boy next door” tri-media sob-sister love story or perhaps, a media pressured long-distance Prince William-Kate Middleton made in University of St. Andrews (St. And) roller coaster love story later revealed and relished like the Brothers Grimm that romantically culminated in the Buckingham Palace Balcony covered by global media and witnessed by thousands of their uproarious subjects.

No, no, no…this is totally different, but partly “a yes” also because, James Toga, the quiet and reserved type met Gladys Leonardo, the personable and sociable type or shall it be “Gladys met James” thing…whatever, the plot opened anyway and they were freshmen at the Negros Occidental High School (NOHS), back in 1992.

Reminiscing the typical boy-girl seating arrangement of the past, James loves the back seat while Gladys, loves the front seat and while they were classmates, both will humor their readers here that no love story ever took place. Well, except for the school setting, a la Prince William-Kate Middleton in the ancient historic “St. And”, Gladys and James, on the other hand, were also in an academe, in the historic NOHS!

It was rather a Queen Victoria of England and Prince Albert of Saxe-Coberg, Germany, late, late “Cupid’s arrow strike”. Born by the same midwife, according to historical narratives, had no contacts whatsoever during their childhood days, so innocent of their destiny while their families desire their royal union. The Queen did not succumb to the forces of princes paraded before her; not until her 17th Birthday in 1836 (she ascended to the throne in 1837), when “beautiful nose, sweet mouth with fine teeth and with most charming countenance” Prince Albert, coming all the way from Germany, celebrated and sojourned with the future Queen. It took them another four years, 10 February 1840, when the pair committed themselves to Holy Matrimony at the Chapel Royal, St. James’s Palace, in London. It was not duty, according to the Queen, it was “excessive love and affection” of an Angel.

Unlike the Royals of the British Empire, however, there were no media, no cellphones, no historical chronographs at that time for Gladys and James, they were sheer innocent freshmen trying to adjust to the rigors of high school life at the NOHS, obviously, no glorious reason for a first date, first dance proms to talk about, no “Hi, I’m James. Can I buy you a drink”, and therefore how can a love story be plotted owing to their own version of a “long-distance” seating arrangement?

Moreover, when they stepped into their sophomore years, the two ended up as aliens from section Mars and section Earth until their graduation in 1996. Even beyond the tertiary years, what can be expected? They didn’t lose touch; they weren’t in touch for the entirety of their academic years. After their college years, Gladys, volunteered as a Physical Therapist, then searched her destiny in Manila as a medical transcriptionist in 2003 while James, at about this time, rooted himself in Bacolod City journalism, honed his craft in photography, photo-journalism and sports writing of which he is quite adept at.

Years passed, both treaded different paths, both eventually had their own love lives. Gladys in Manila had three suitors and one of them almost made it into a relationship while James pursued his lady love here in Bacolod, a part of the story that could have been the “they lived happily ever-after” ending. Not yet. The universe conspired by giving them reasons to reconnect; proving that when two people are destined to be with each other, life inevitably brings them together.

It was again within the great halls of NOHS and its known tradition of alumni reunion back in 2009 that became the time and scene for a love story plot to bud and bloom. James, after more than a decade hence and a year earlier in 2008, got involved in their NOHS Alumni Batch 1996 activities. Gladys, now settled in Bacolod because her work opened a branch here, joined the following year, in 2009.

Now the “story of the century” opened. Gladys got a call from one their Batches’ Board of Director (BOD) classmate asking for help in organizing the summer reunion, “our first participation in the NOHS Alumni Homecoming in 2010”. In one of the BOD meetings, she said, “I met James again. It took a long time recalling who he was until I finally did. He was a classmate in our freshmen year and that was it, I don’t have memories of him but I liked him that very moment. He was assigned as our batch photographer during reunion events. He is handsome, his calm and cool nature attracted me most, almost like the calm features of my father who passed in 2017. My father had known James for a while before he died in January 2017.”

“I just kept this to myself for a lot of reasons including the fact that James was having a relationship back then until the bowling season started,” Gladys reminisced but, wait… oh, that bowling scene, that bowling… and bowlers kept their minds out of the gutter, leave no pin standing and this was how they rolled, love is in the offing.

Enter James, in the next scene. He said, “I thought she had the sweetest smile in the room, so this sparked my interest to get to know her more. Communicative, determined, enjoys creating order, direct and honest – these are some of the traits that caught my attention. sometimes in jest, I would say to her that she had me at her strike when she joined our high school (NOHS) batch’s duckpin bowling team back in 2012.”

In the last quarter of 2012, Batch 1996 Team participated for the first time in the alumni bowling. I joined in, not knowing James would be there, too. As though the bowling, thunder and lightning strike now, “every Saturday we met to play, bond afterwards and James would walk me home,” recalls Gladys.

Now here, James had the most vivid memory, also, by his recollection of the exact date, the 13th of July 2015, he said, “it took me three years to realize that it’s about time to take our flourishing friendship to another level. So, I decided to confess that I care so much about her and our relationship,” while Gladys added, “Romantic feelings have risen at some point until we made it official in 2015. Since then, we were inseparable, hanging out watching movies, hanging out with other bowlers for loads of beers, etc.“

It was in December 2019, that Gladys and James celebrated their engagement with both their families and announced that their wedding date will take place on May 15, 2021 (coincidentally when they met at “Louise” for this interview) Because of the pandemic and the subsequent ECQ in March of 2020, the future became so uncertain that everyone was kept worried as to how long will this crisis last. Thus, the decision to move the wedding bells scheduled in December 17, 2021, prayerful and hopeful that everything will be halfway better by then and their relatives from abroad can safely fly home.* (Gil B. Severino/Estevan Digital Photography) 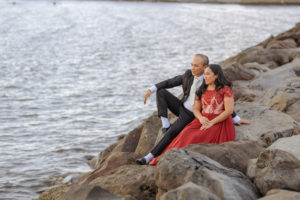 The Department of the Interior and Local Government (DILG) is allowing local government units (LGUs) to exercise and implement its own health protocols for returning OFWs (overseas Filipino workers) and stranded residents, in order to protect the general community from the coronavirus disease (COVID-19).

After leading the annual stockholders meeting and board election of Vallacar Transit Inc last December 4, 2021, Olivia Yanson once…

Third District Cong. Kiko Benitez recently met with key stakeholders in the forefront of a Conservative Rehabilitation Program for Balay…

36K Bacolodnons with no birth certificate to be registered