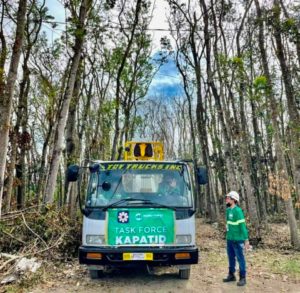 More Electric and Power Corporation (MORE Power) has sent augmentation to Negros Island to help on their restoration works being undertaken by the Negros Occidental Electric Cooperative due to the devastation of Super Typhoon Odette over the weekend.

The MORE Power personnel, on arrival in Negros, immediately went to work.

Castro said the team is composed of engineers, line warriors and customer care staff. They are equipped with the necessary tools and equipment and are prepared to stay for the rest of the holiday season until the job is done.

“This is indeed the season for helping and spreading the love of Christ and MORE Power is glad and very much honored to be a part of this worthy endeavor since the power system of Iloilo City was completely restored last Saturday,” said Castro.

While he noted that this augmentation is part of their corporate social responsibility, the situation calls for it and they are ready to do it.

The province of Negros Occidental was one of the hardly hit areas by Typhoon Odette. Power restoration activities are still ongoing by the province’s power distributor.

Earlier, Cabinet Secretary Karlo Nograles said that President Rodrigo Duterte has directed the DOE to revive the supply of electricity in areas ravaged by the typhoon.

Nograles announced that some areas, particularly Dinagat Islands, still do not have electricity as of presstime.

In Iloilo City, MORE Power was able to register a 100 percent restoration of its energy supply in this southern metropolis in less than 24 hours after Typhoon Odette’s rage which damaged a total of 123 poles, electricity lines and its laterals.

Castro, as early as 12noon on Dec. 18, declared their operations as back to normal following the sub-transmission, feeders, primary and majority of the secondary lines and laterals have been cleared and restored.

“Inuna natin ang sub transmission because these are the lines that feed to the substations. After na clear yun, ang substations natin–nag cooperate walang problema. From the substations we go to the feeder that is why may restoration na kaagad of operation. After feeder, we go to the primary lines and from the primary to the secondary because yan na ang papunta talaga sa consumers sa consumers,” Castro recalled on how they strategized on their fast restoration.

As of the weekend, the remaining works are mostly on the secondary lines connecting to the consumers’ residential lines.

Iloilo City Mayor Jerry Treñas could not help but be proud of MORE Power. He specifically commended Castro and his team for the extra mile effort.

“In so far as Iloilo City is concerned, the performance of MORE Power as a distribution utility company is totally unprecedented. I am very grateful in behalf of the great people of Iloilo City,” the mayor stated in a press statement.

Treñas noted that during the past calamities under the previous distribution utility it takes several weeks or months for areas of the city to be energized after any typhoon.

Castro, meantime, was humbled by Treñas statement. He dedicated those commendation most especially to their people in the field whom he described as “really dedicated and very professional in carrying out the job.”

“Although we always work as a team but because of the professionalism ng mga tao natin and their dedication to work kaya naachieve natin itong ganitong performance,” said Castro.

Castro emphasized that the speedy and successful restoration works was a product of preparations and contingency plans made by More Power even before Odette hit the city.

Castro said prepositioning of logistics and materials needed in the recovery and restoration efforts also contributed to the smooth flow of their operations as well as the shifting of duties of its personnel for them to be given enough time to rest to improve work efficiency.

He also attributed the success of their operation to MORE Power engineers who provided the leadership during the recovery works.

Other distribution utilities in the region covering areas which are badly hit by Typhoon Odette are still struggling to restore their electric supply to their consumers.*

The Philippine Institute of Certified Public Accountants (PICPA), the accredited national professional organization of certified public accountants, is celebrating the…

The local government units in Western Visayas, including Moises Padilla, Murcia, Calatrava and Carles entered into an agreement with the…

The Negros Occidental Capitol Building in Bacolod City will be locked down for five days effective today after Gov. Eugenio…

The Office of the President (Rodrigo “Digong” Duterte) and the Office of Senator Christopher Lawrence “Bong” Go, with the Department…