While his rival declined to participate in the debate, Benitez showed Bacolodnons that he is ready to serve them with no excuses.
“I thank UPLAA-NO and their partners for initiating this debate. I welcome any forum, in whatever platform and format, where I could present my vision and highlight my plans for Bacolod City,” Benitez said.

The Benitez camp also added that rivals’ camp already had previous communication with the organizers months before the debate and they were actually surprised with the rival’s withdrawal.

“Our camp were the last to know about the platform, format and the mechanics. But still, we decided to push through because we value Bacolodnons and we owe them the education and information about our intention and platforms,” Atty. Andrei Norman Saril, Benitez legal adviser, said.

“I only wish I had more time to answer the many questions of the sectors, and elaborate on my plans to address their needs and concerns,” Benitez said.

The organizers, UPLAA-NO, thanked Albee Benitez for his time and effort in making it to the townhall debate. They hope that it can help voters make well-informed judgment based on critical issues when they exercise their right to vote on election day.* 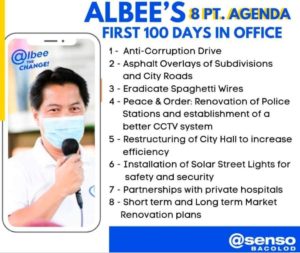 PPCRV looking for volunteers in Negros for election day

The top drug personality in San Carlos City, Negros Occidental was apprehended by joint police operatives in that northern Negros…

Eight Negrense-scholars who took the National Careworker Licensure Examination in Miyazaki Prefecture, Japan passed the board examinations, recently. They are…

As the season of festivities and merriment draw near, SM City Bacolod started the celebrations early with the annual lighting…