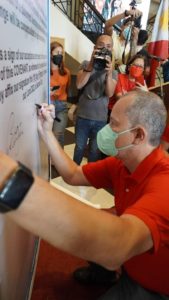 At the launch of the “Kasimbayanan for S.A.F.E. 2022” held early this afternoon at the Bacolod City Government Center, Grupo Progreso bets led by Team ABEL (Atayde, Bing and El Cid) also vowed to focus on their respective platform of governance and to refrain from attacking the personal lives of their fellow candidates during the campaign period.

They also promised to avoid vote-buying, all forms of election fraud and use of threats.

All candidates signed the peace covenant that also calls on aspirants to refrain from spending beyond what is lawfully permitted; to be held accountable for the actions of their campaign leaders and accept the results of the election and respect whatever will be the decision of the people on May 9.

“This is a very important event that is why Grupo Progreso came in full force. We believe in the spirit and intent of the peace covenant,” Leonardia pointed out.

Councilor Archie Baribar, who is out of town, was represented by his son, Arete Baribar.* 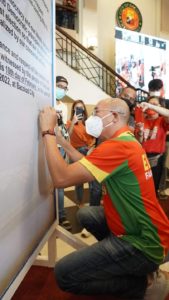 A 36-year-old female high-value drug personality yielded P2.8 million worth of suspected shabu during a police buy-bust in Barangay Singcang-Airport,…

SYNOPSIS: At 3:00 AM today, the Low Pressure Area (LPA) was estimated based on all available data at 350 km…