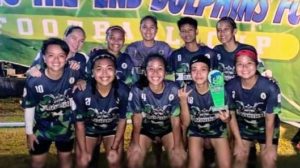 The Women’s team of Sketchy Horse settled for the 2nd Runner-Up honor after a heated and soggy afternoon of riff against EVFC during the semi finals which ended in a penalty shootout following a scoreline of 0-0 with a standing of 4-0-0 in a group stage against USLS Alumni, Cebu Elite, Bacong FC, and Dolphins FC.

They eventually bowed down to the Champion team of the 2nd Dolphins Cup held at La Providence, Granada, Bacolod City last March 19-20, 2022.

Participated by 81 teams, together with their die-hard supporters, they celebrated the Post Pandemic Normal, Festival of Football.

The runner-up group of seven is powered by Mahoganypoint, The Sketchy Horse, Binance, and United Friends of Ronins.*

A locally-developed smart greenhouse hydroponics project in Iloilo now benefits a farm enterprise. This project applies the Internet of Things…

The Life of Chanel

Planning to get a pet way back in 2017, Chanel was already enlisted by another fur parent, after a couple…

The first human milk bank in Negros Island was inaugurated, this morning, at the Teresita L. Jalandoni Provincial Hospital in…