The Mines and Geosciences Bureau in Western Visayas (MGB 6) has recommended the updating of its geohazard map to include areas and places that experienced flooding and landslide during Tropical Depression Agaton in April.

The Regional Disaster Risk Reduction and Management Council (RDRRMC) during its full council meeting held on May 4 was supportive of the move of the MGB, said Cindy Ferrer, information officer of the Office of Civil Defense and at the same time RDRRMC spokesperson.

“Some of the landslides are new so one of their recommendations was to update the geohazard map,” she said in an interview on Saturday.

Ferrer, citing the latest RDRRMC situation report, said 73 rain-induced landslides were monitored during Agaton: 18 from Capiz, 24 from Iloilo province, 23 from Antique, seven from Negros Occidental, and one in Aklan.

Some 388 barangays all over the region were flooded.

“Some of the incidents used to be minimal but the hazard became risky during Agaton,” she added.

There was no timeline though as to the period of updating but geologists have been deployed since Typhoons Odette and Agaton for rapid geohazard assessment, she said.

In addition to updating the geohazard map, the MGB also recommended the relocation of residents staying in critical geohazard zones and the prohibition of the construction of houses, schools, and important infrastructures in the landslide- and flood-prone areas.* (Perla Lena, PNA) 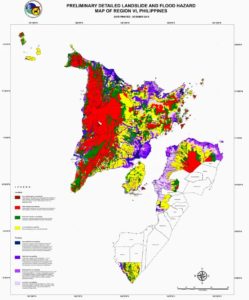 Malacañang today appealed to locally stranded individuals (LSIs) to stay in their homes while waiting to be sent off to their respective provinces instead of crowding in areas where they are at risk of contracting coronavirus disease (Covid-19).

As part of its “TESDAmayan” initiative, the Technical Education and Skills Development Authority (TESDA) has deployed its trainers for different…