Governor Eugenio Jose Lacson led the turnover to the recipients, who received P5,000 each, in a series of visits in these areas on Monday and Tuesday, May 30 and 31. 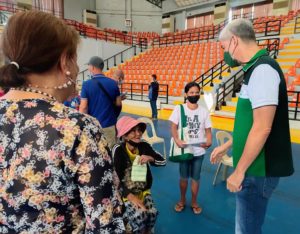 “We are distributing the assistance depending on the actual number of typhoon victims in each LGU,” he said.

In the northern parts of the province, there were 76 beneficiaries in Cadiz City and 215 received assistance in Victorias City this morning, May 31.

In the afternoon, there were 699 recipients in Pontevedra town in the south.

In Cadiz, Mayor Salvador Escalante told the recipients to appreciate the efforts of the government to assist them.

The distribution of assistance was the second time after the kick-off in Kabankalan City also in the south on May 30, where 7,234 beneficiaries also received P5,000 each.

The cash aid came from the P90 million committed by the NHA to the provincial government to rebuild the damaged houses of Negrenses affected by Typhoon Odette on December 20.

On December 20, President Rodrigo Duterte visited Kabankalan to check the areas affected by the typhoon in Negros Occidental.

CDC Ph calls on DOLE to enforce guidelines against unlawful no vaccine, no work policies

The Emergency Operations Center-Task Force (EOC-TF) is encouraging hotels, restaurants, and other business establishments in Bacolod City to offer incentives…