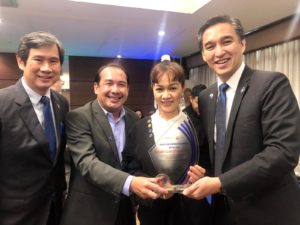 The Rotary Club of Bacolod further went to greater heights when it was awarded and bestowed the “Highest Club in Incremental Membership” during the Awards and Recognition night by Rotary International’s in Zone 10-A, Philippines held at Quezon City Sports Complex last Sept. 29, 2022.

Accepting the award was Life Changing President Pauline Cuaycong, for her continued exemplary and outstanding club and members performance during the Rotary Year 2021-2022 and assisted by her Club Secretary & Past President Frederick Anthony de Leon.

By far, it is the highest award and recognition accorded to the Rotary Club of Bacolod in its 85 years of service to humanity.* (PP Fab De Leon/RC Bacolod)

The National Grid Corp. of the Philippines (NGCP) said it is imperative that they shut down the Amlan-Siaton 69kV line…

CENECO  SETS  POWER  INTERRUPTION  ON  MAY 15 Central Negros Electric Cooperative, Inc. informs its consumers that maintenance activities will be…